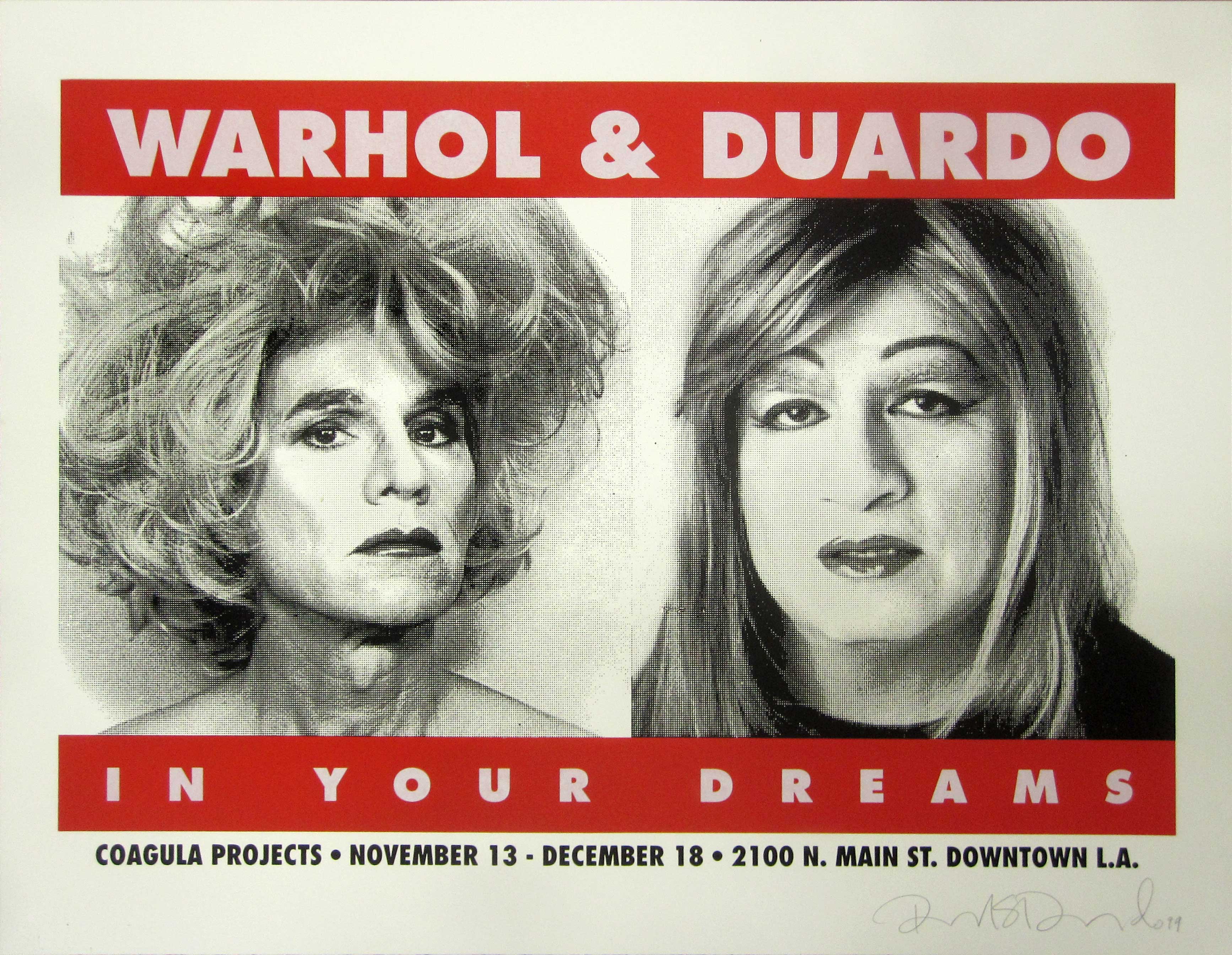 It is with great pleasure that we share the current exhibition at The McNay Art Museum in San Antonio, Texas.

Our founder, family, and friend, the late Richard Duardo, is on exhibition alongside his caddy-costal, pop-icon, nickname-sake, Andy Warhol!

“This exhibition focuses on the accomplishments and influence of two major American artists, Andy Warhol and Richard Duardo, who both have had a significant presence at the McNay. Here, Warhol’s Liz hangs alongside Duardo’s Four Fridas, which not only pays homage to the great Mexican artist Frida Kahlo, but demonstrates Duardo’s great admiration for the work of Warhol. Duardo, often referred to as the West Coast Warhol, employs the Pop master’s use of multiple images set in a grid, vivid color palette, and photographic source material…” (McNay.com)

A huge thank you to Lyle Williams, the Curator of the current presentation (as well as the 2015 McNay Duardo Exhibition), and to The McNay Art Museum for championing Duardo’s story ever since his passing in 2014.

The nickname The West Coast Warhol, or Warhol of the West, was coined for Duardo at least before the turn of the century, as is seen in the above 1999 limited edition serigraph. Mat Gleason and Richard Duardo hosted this event at Coagula Gallery. The nickname was received rather ambivalently at times by Duardo, and in the next breath he was a self-proclaimed “third generation pop artist” a la Warhol. At one point they met, offered each other assistant printer positions on their respective coastal studios, and mutually declined. (More Stories from UCLA’s CSRC here)

Richard Duardo, albeit renowned in an international way, still has not seen the same fame and success that many of the artists he influenced over the decades have. I believe his legacy, lore, and art are will only grow with time, making him the timeless legend he already is to so many influential artists to the rest of the art world.

Charlie Anderson is best known for his choppy collaged imagery, made up of layered stencils of advertisements, magazine clippings and various other forms of contemporary media.  Anderson is able to develop a richly complex atmosphere of text and imagery with his work and it’s not uncommon for him to include bold figures within his compositions.  Richard Duardo enjoys a similar format in many of his works; often developing an abstract background of shapes and color to support a strong figurative subject in the foreground.  The two styles lean nicely to this collaborative project where both Anderson and Duardo actually hand painted into each specific print, making them not only unique but alive with gesture and movement.  You can view “Sumo # 2”  in our online store, where unique versions are still for sale.  Enjoy!

Modern Multiples is featured in this months issue of Catapult Art Magazine in an article written by Scott Bailey ‘The Road More Traveled”.  Catapult Art Magazine is a monthly magazine showcasing enormous talent from all over the world . The author of the article, Scott Bailey, is a friend to our studio as well as a writer for many other magazines and sites such a Arrested Motion, Hi Fructose, to name a few.  We couldn’t be any more excited to be featured and would love for you all to check it out when you get a chance.

Here are some snap shots of the feature:

Modern Multiples and Mr. Tito Beveridge, master distiller of Tito’s Handmade Vodka, is proud to announce the official Inkubator Kick Off Event and Fundraiser taking place on December 3, 2013 from 6pm to 10pm at KGB which is located at 1640 N. Spring Street, Los Angeles, CA  90012. Kick off event event will include an exhibit featuring a special selection of prints from the Modern Multiples Collection to  be on display and for sale as well as complimentary BBQ, cocktails and music. As an effort to raise money for the new Non-Profit launched by Modern Multiples titled Inkubator, a small cash donation of $10 is required at the door.  All proceeds are to benefit the Inkubator arts program. RSVP is REQUIRED.  Please RSVP to Drew@titosvodka.com. Deadline to RSVP is December 2, 2013.

Inkubator  aims to cultivate young and/or emerging artists under the collaborative efforts of Modern Multiples and the non-profit organization Artists for Trauma (AFT).  The Inkubator program will have two elements: Artist-in-Residence and Youth Leadership. Both are cultivated to open up new opportunities for young adults and to help them move forward in the creative careers.

Inkubator Kick Off Event and Fundraiser is sponsored by Tito’s Handmade Vodka.

For questions regarding Inkubator or the event, please email us at info [at] modernmultiples.com.

See you all at the event and thank you so much for all your support.  We aim to teach our youth and help them move forward in their artistic endeavors.

Brooklyn & Boyle’s Vol. 4, No. 6 August issue recently featured the first time ever collaboration between Modern Multiples Richard Duardo and artist Antonio Pelayo.  One of their prints from the “Project Frida” series resulting from the collaboration made front page. Please be sure to pick up this exciting issue and read this very well written article “Antonio Pelayo and Richard Duardo Converge with Project Frida” which is found on page 16.